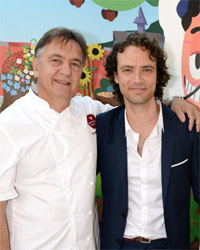 Streetcube is about providing ethically sourced food which is affordable, diverse and delicious - whats not to love?!

Olivier grew up in a food loving environment, with the chef Raymond Blanc as his father and his mother being Cordon Bleu trained, he was fortunate enough to learn about the importance of sourcing fresh produce as well as learning about good food ethics from an early age. Olivier then read English at Leeds university before going on to complete a film making course at New York Film Academy. On returning to the UK he worked in the TV industry as an assistant director before deciding to create an application to connect young children with food and nature. With the help of Raymond Blanc and Simon Pegg, the app was launched in August 2013 and Henri Le Worm was born! The app reached the number one position in Apple's Education category and several awards followed. He then decided to focus his attention on raising grassroots awareness within primary schools, and he created a free interactive and fully animated website including free lesson plans which are available on TES. Olivier regularly visits schools explaining how the teachers can use Henri as an educational tool as well as raising awareness of how to improve the food culture within schools through live cooking. Other associated events include live cooking events at RHS shows and an award winning kids’ show garden at RHS Hampton Court Flower Show 2015. Olivier has also been an ambassador for the annual London Produce Show as well as an ambassador for the organisation Love British Food since 2014.